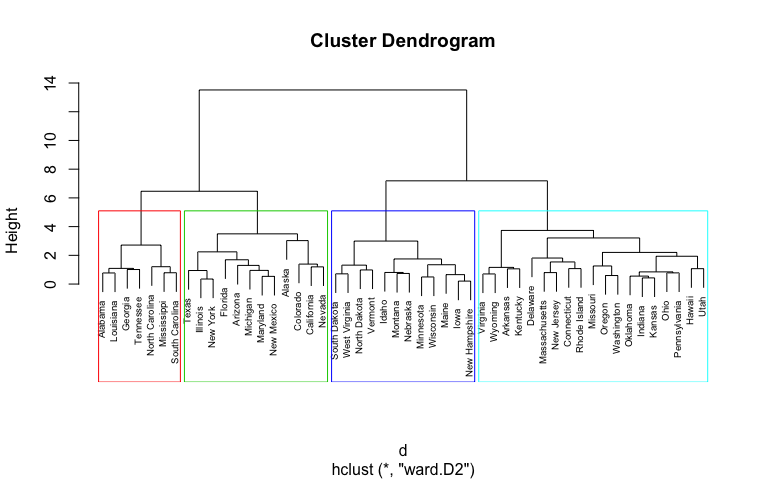 This tutorial serves as an introduction to the hierarchical clustering method.

The required packages for this tutorial are:

Hierarchical clustering can be divided into two main types: agglomerative and divisive.

However, a bigger question is: How do we measure the dissimilarity between two clusters of observations? A number of different cluster agglomeration methods (i.e, linkage methods) have been developed to answer to this question. The most common types methods are:

We can see the differences these approaches in the following dendrograms: 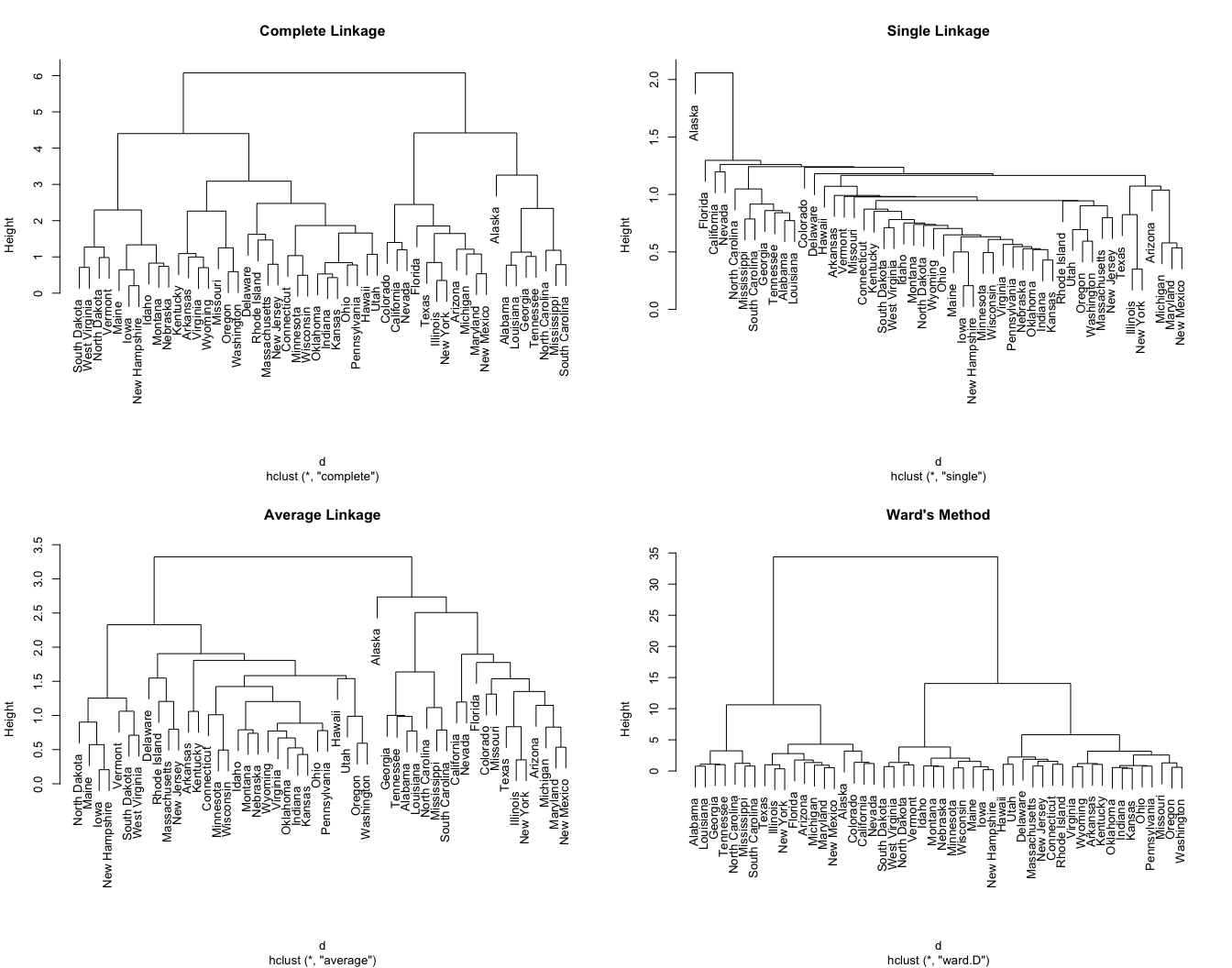 To perform a cluster analysis in R, generally, the data should be prepared as follows:

Here, we’ll use the built-in R data set USArrests, which contains statistics in arrests per 100,000 residents for assault, murder, and rape in each of the 50 US states in 1973. It includes also the percent of the population living in urban areas

To remove any missing value that might be present in the data, type this:

As we don’t want the clustering algorithm to depend to an arbitrary variable unit, we start by scaling/standardizing the data using the R function scale:

There are different functions available in R for computing hierarchical clustering. The commonly used functions are:

We can perform agglomerative HC with hclust. First we compute the dissimilarity values with dist and then feed these values into hclust and specify the agglomeration method to be used (i.e. “complete”, “average”, “single”, “ward.D”). We can then plot the dendrogram. 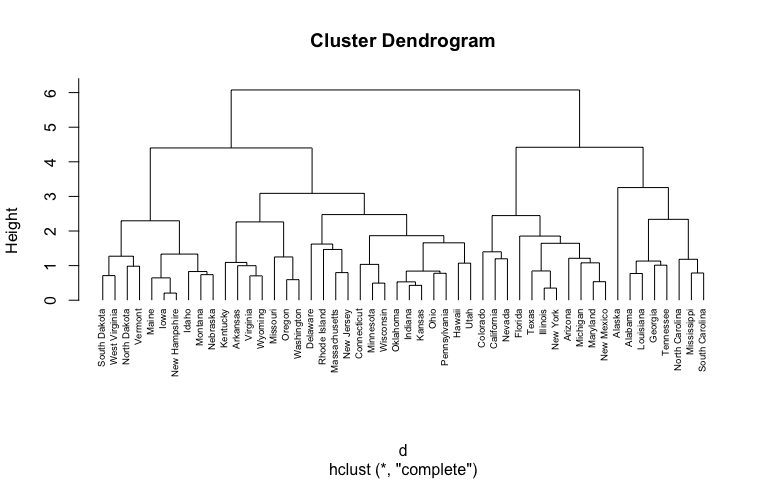 Similar to before we can visualize the dendrogram: 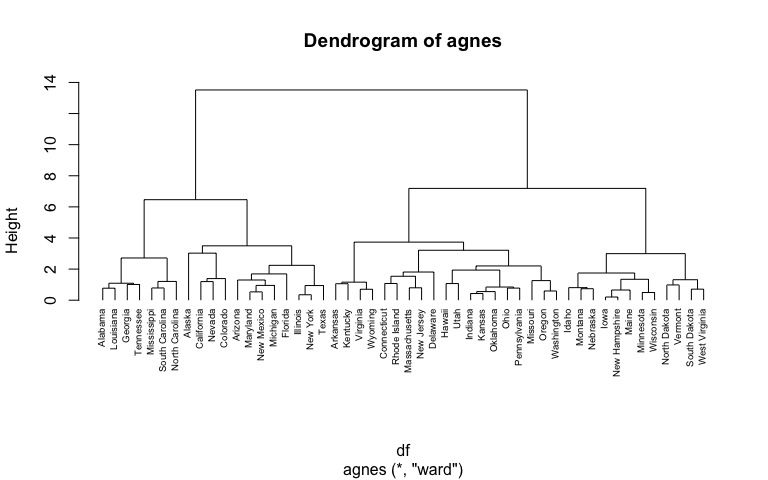 The R function diana provided by the cluster package allows us to perform divisive hierarchical clustering. diana works similar to agnes; however, there is no method to provide. 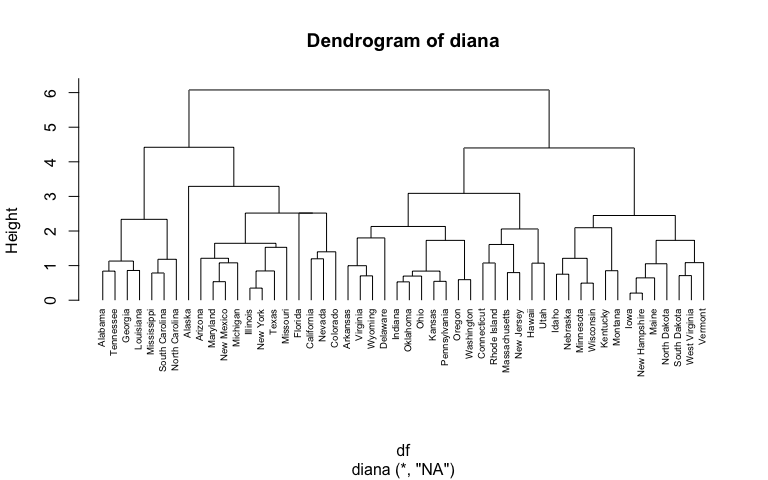 In the dendrogram displayed above, each leaf corresponds to one observation. As we move up the tree, observations that are similar to each other are combined into branches, which are themselves fused at a higher height.

The height of the cut to the dendrogram controls the number of clusters obtained. It plays the same role as the k in k-means clustering. In order to identify sub-groups (i.e. clusters), we can cut the dendrogram with cutree:

We can also use the cutree output to add the the cluster each observation belongs to to our original data.

It’s also possible to draw the dendrogram with a border around the 4 clusters. The argument border is used to specify the border colors for the rectangles:

As we saw in the k-means tutorial, we can also use the fviz_cluster function from the factoextra package to visualize the result in a scatter plot. 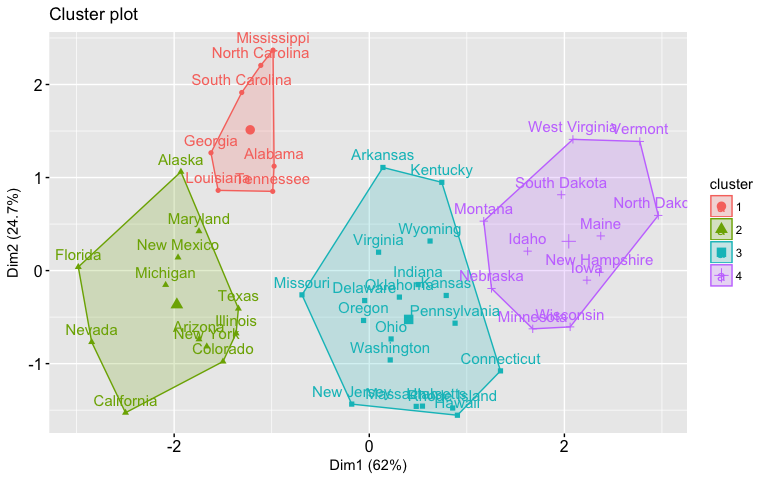 To use cutree with agnes and diana you can perform the following:

Lastly, we can also compare two dendrograms. Here we compare hierarchical clustering with complete linkage versus Ward’s method. The function tanglegram plots two dendrograms, side by side, with their labels connected by lines. 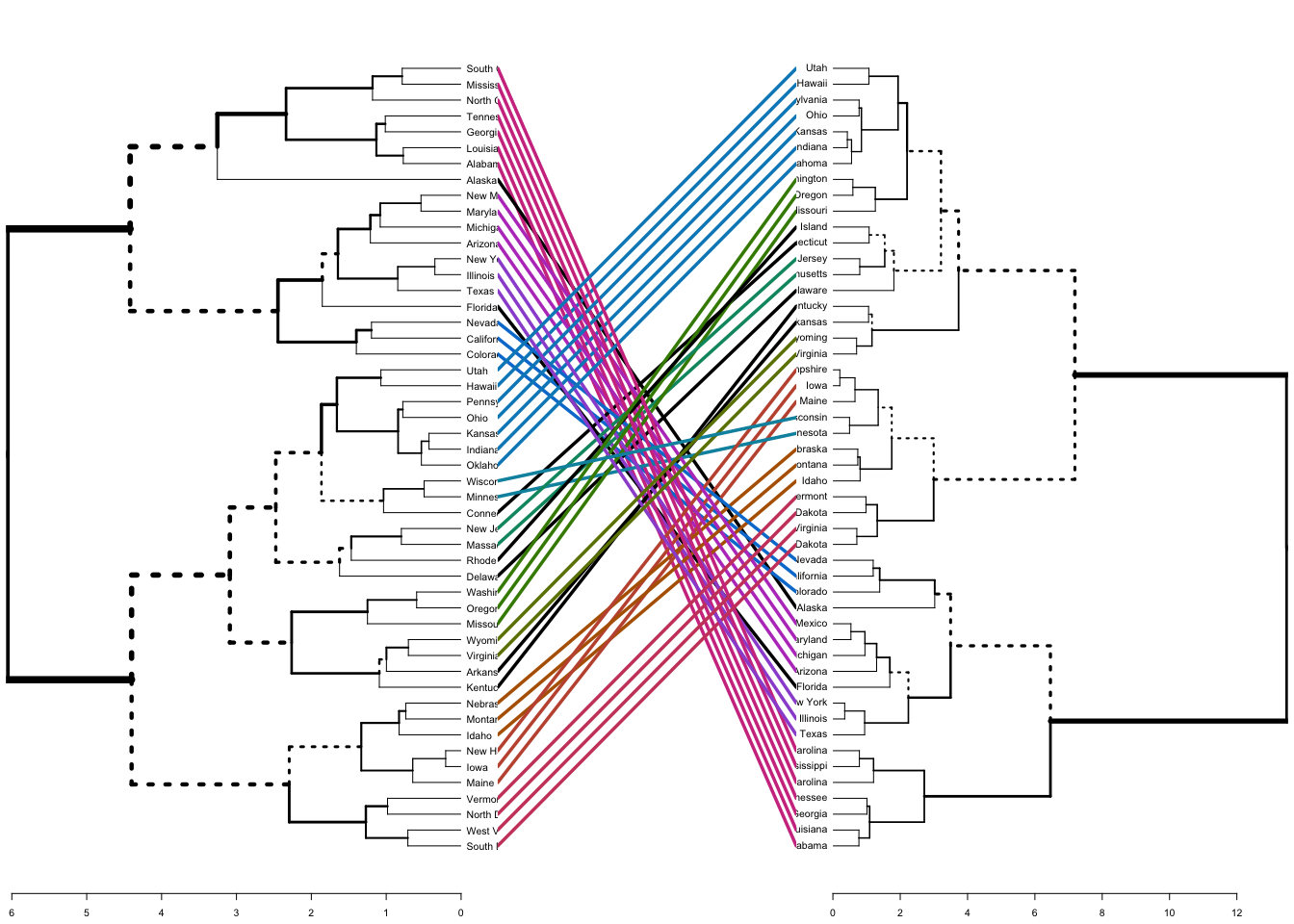 The output displays “unique” nodes, with a combination of labels/items not present in the other tree, highlighted with dashed lines. The quality of the alignment of the two trees can be measured using the function entanglement. Entanglement is a measure between 1 (full entanglement) and 0 (no entanglement). A lower entanglement coefficient corresponds to a good alignment. The output of tanglegram can be customized using many other options as follow: 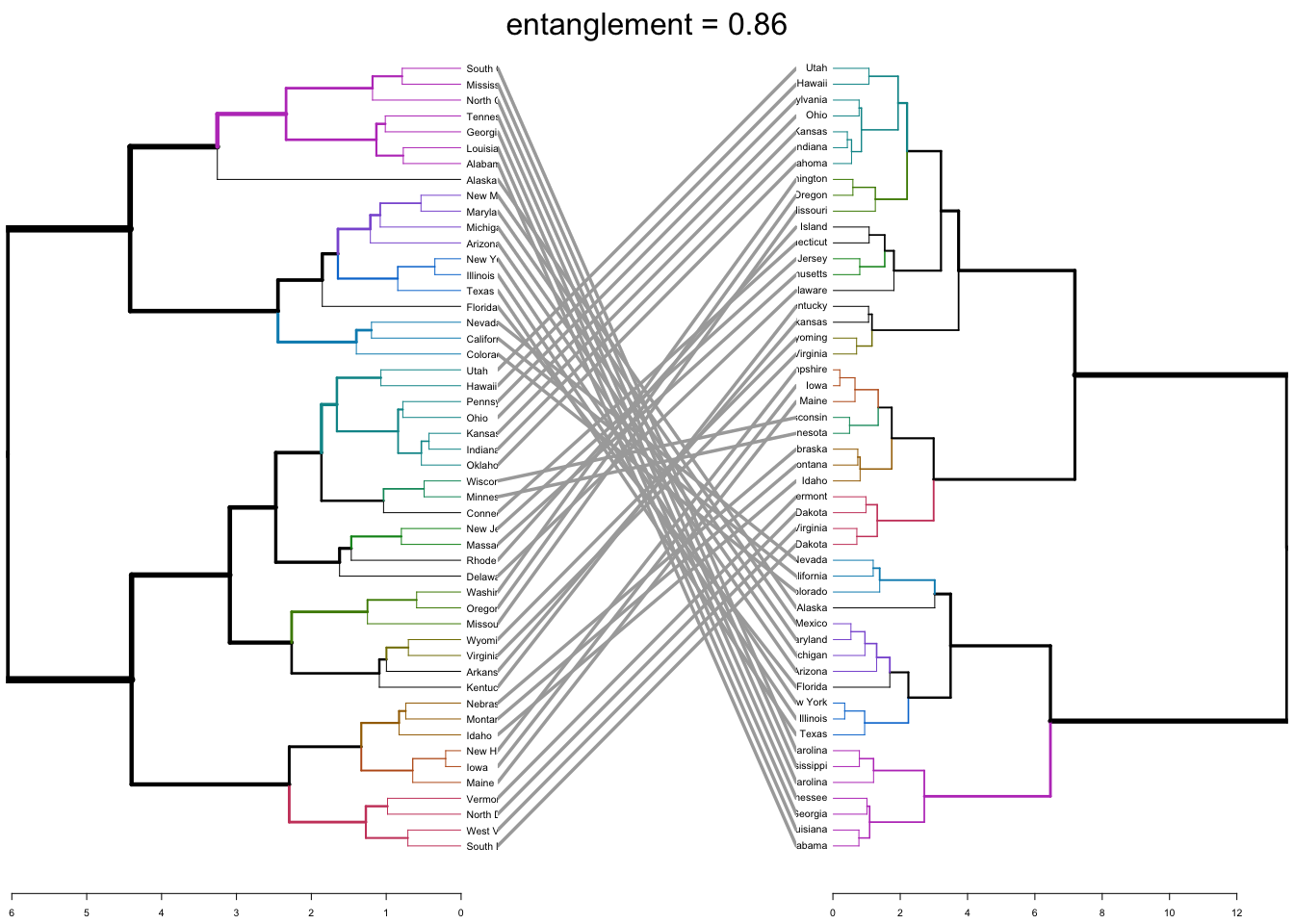 Similar to how we determined optimal clusters with k-means clustering, we can execute similar approaches for hierarchical clustering:

To perform the elbow method we just need to change the second argument in fviz_nbclust to FUN = hcut. 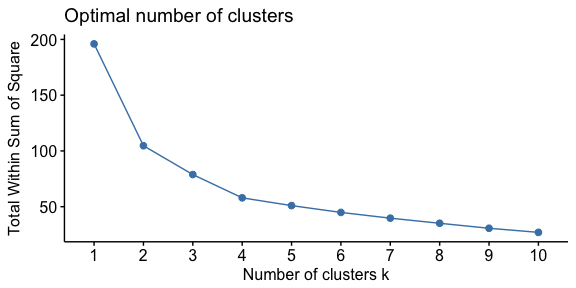 To perform the average silhouette method we follow a similar process. 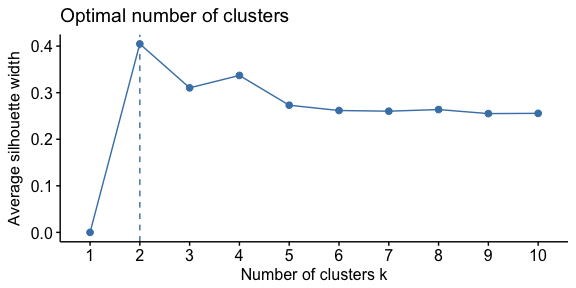 And the process is quite similar to perform the gap statistic method. 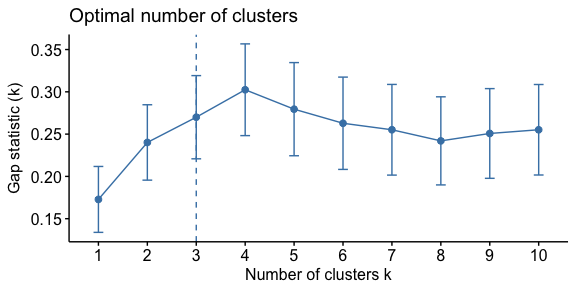 Clustering can be a very useful tool for data analysis in the unsupervised setting. However, there are a number of issues that arise in performing clustering. In the case of hierarchical clustering, we need to be concerned about:

Each of these decisions can have a strong impact on the results obtained. In practice, we try several different choices, and look for the one with the most useful or interpretable solution. With these methods, there is no single right answer - any solution that exposes some interesting aspects of the data should be considered.