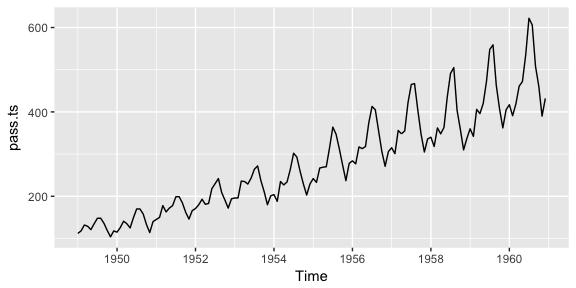 Time series forecasting is performed in nearly every organization that works with quantifiable data. Retail stores forecast sales. Energy companies forecast reserves, production, demand, and prices. Educational institutions forecast enrollment. Goverments forecast tax receipts and spending. International financial organizations forecast inflation and economic activity. The list is long but the point is short - forecasting is a fundamental analytic process in every organization. The purpose of this tutorial is to get you started doing some fundamental time series exploration and visualization.

This tutorial serves as an introduction to exploring and visualizing time series data and covers:

This tutorial leverages a variety of data sets to illustrate unique time series features. The data sets are all provided by the forecast and fpp2 packages. Furthermore, these packages provide various functions for computing and visualizing basic time series components.

A time series can be thought of as a vector or matrix of numbers, along with some information about what times those numbers were recorded. This information is stored in a ts object in R. In most examples and exercises throughout the forecasting tutorials you will use data that are already in the time series format. However, if you want to work with your own data, you need to know how to create a ts object in R.

Here, I illustrate how to convert a data frame to a ts object. First, let’s assume we have a data frame named pass.df that looks like the following where we have the total number of airline passengers for each month for the years 1949-1960.

We can convert this data frame to a time series object by us the ts() function. Here, the…

We now have converted our data frame into a time series object:

Go ahead and compare this pass.ts time series object to the built-in AirPassengers data set.

The first step in any data analysis task is to plot the data. Graphs enable you to visualize many features of the data, including patterns, unusual observations, changes over time, and relationships between variables. Just as the type of data determines which forecasting method to use, it also determines which graphs are appropriate.

Here, we use the autoplot() function to produce time plots of ts data. In time series plots, we should always look for outliers, seasonal patterns, overall trends, and other interesting features. This plot starts to illustrate the obvious trends that emerge over time.

We can compare the trends across the different variables (countries) either in one plot or use the facetting option to separate the plots:

You may have noticed that autoplot() looks a lot like ggplot2 outputs. That’s because many of the visualizations in the forecast package are built on top of ggplot2. This allows us to easily add on to these plots with ggplot2 syntax. For example, we can add a smooth trend line and adjust titles: 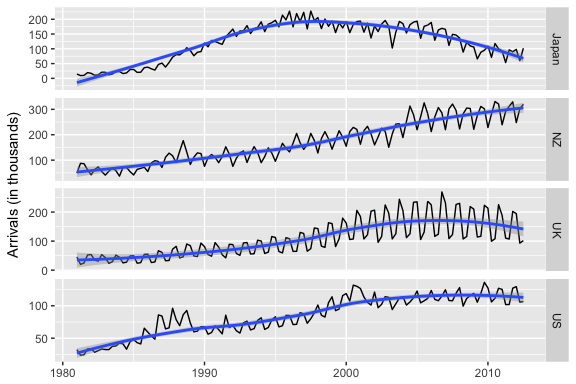 These initial visualizations may spur additional questions such as what was the min, max, or average arrival amount for Japan. We can index and use many normal functions to assess these types of questions.

You can also use the frequency() function to get the number of observations per unit time. This example returns 4 which means the data are recorded on a quarterly interval. 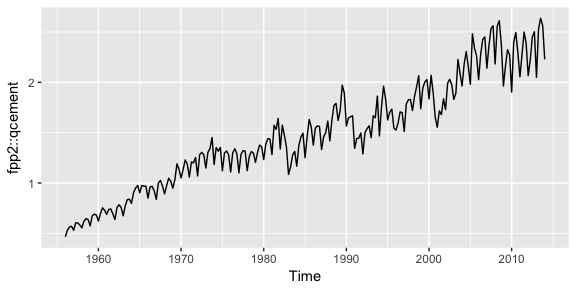 Later tutorials will illustrate how to decompose each of these components; however, next we’ll look at how to do some initial investigating regarding seasonality patterns.

There are a few useful ways of plotting data to emphasize seasonal patterns and show changes in these patterns over time. First, a seasonal plot is similar to a time plot except that the data are plotted against the individual “seasons” in which the data were observed. We can produce a seasonal plot with ggseasonplot(): 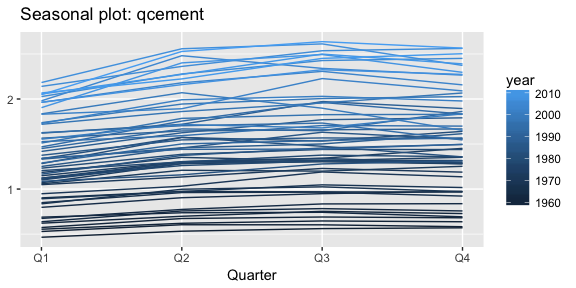 This is the same qcement data shown above, but now the data from each season are overlapped. A seasonal plot allows the underlying seasonal pattern to be seen more clearly, and can be useful in identifying years in which the pattern changes. Here, we see that cement production has consistently increased over the years as the lower (darker) lines represent earlier years and the higher (lighter) lines represent recent years. Also, we see that cement production tends to be the lowest in Q1 and typically peaks in Q3 before leveling off or decreasing slightly in Q4.

A particular useful variant of a season plot uses polar coordinates, where the time axis is circular rather than horizontal. Here, we plot the a10 data with the conventional seasonal plot versus a polar coordinate option to illustrate this variant. Both plots illustrate a sharp decrease in values in Feb and then a slow increase from Apr-Jan. 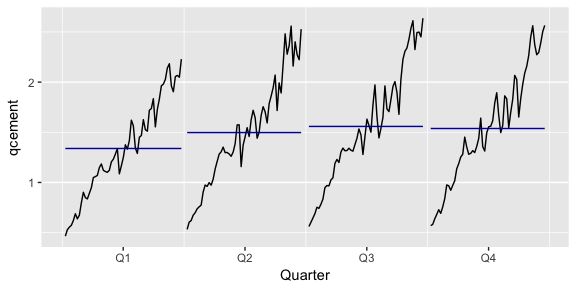 This form of plot enables the underlying seasonal pattern to be seen clearly, and also shows the changes in seasonality over time. It is especially useful in identifying changes within particular seasons. In this example, the plot is not particularly revealing; but in some cases, this is the most useful way of viewing seasonal changes over time.

Another way to look at time series data is to plot each observation against another observation that occurred some time previously. For example, you could plot against . This is called a lag plot because you are plotting the time series against lags of itself. The gglagplot() function produces various types of lag plots.

where T is the length of the time series. And similar to correlation, autocorrelation will always between +1 and -1.

When these autocorrelations are plotted, we get an ACF plot. The ggAcf() function produces ACF plots. Here we look at the total quarterly beer production in Australia (in megalitres) from 1956:Q1 to 2010:Q2. The data are available in the fpp2::ausbeer time series data.

The middle plot provides the bivariate scatter plot for each level of lag (1-9 lags). The right plot provides a condensed plot of the autocorrelation values for the first 23 lags. The right plot shows that the greatest autocorrelation values occur at lags 4, 8, 12, 16, and 20. We can adjust the gglagplot to help illustrate this relationship. Here, we create a scatter plot for the first 16 lags. If you look at the right-most column (lags 4, 8, 12, 16) you can see that the relationship appears strongest for these lags, thus supporting our far right plot above.

When data are either seasonal or cyclic, the ACF will peak around the seasonal lags or at the average cycle length. Thus, we see that the maximal autocorrelation for the ausbeer data occurs at a lag of 4 (right plot above). This makes sense since this is quarterly production data so the highest correlated value for a particular quarter will be the same quarter in the previous year.

A simplified approach to thinking about time series features and autocorrelation is as follows:

2. Seasonality will induce peaks at the seasonal lags. Think about the holidays, each holiday will have certain products that peak at that time each year and so the strongest correlation will be the values at that same time each year.

3. Cyclicity induces peaks at the average cycle length. Here we see that there tends to be cyclic impact to the mink population every 10 years. We also see this cause a peak in the ACF plot.

Time series that show no autocorrelation are called “white noise”. For example, the following plots 36 random numbers and illustrates a white noise series. This data is considered idependent and identically distributed (“iid”) because there is no trend, no seasonality, no autocorrelation…just randomness. 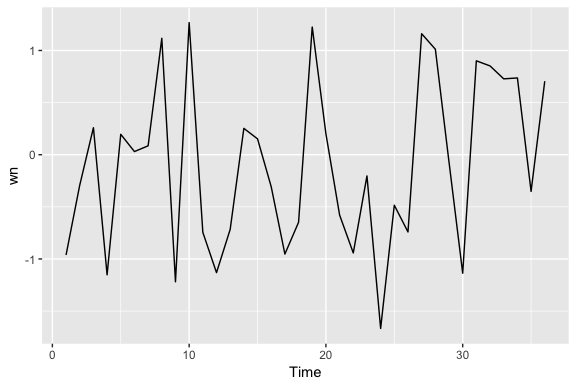 When using ggAcf, the dotted blue lines represent the 95% threshold. Here, we see that none of the autocorrelations exceed the blue line so we can be confident there is no time series component to this data. 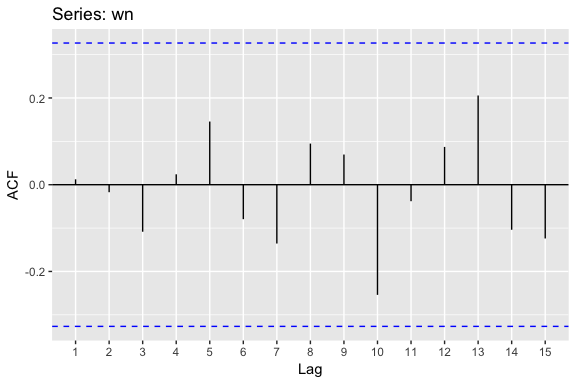 Assessing autocorrelation can be quite useful for data sets where trends and seasonalities are hard to see. For example, the following displays the monthly number of pigs slaughtered in Victoria, Australia from 1990-1995. There may be a slight trend over time but it is unclear. 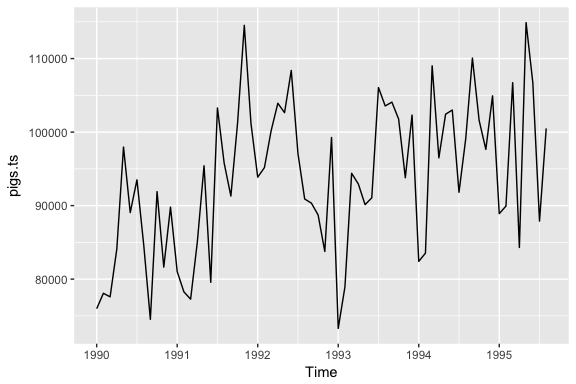 However, looking at the ACF plot makes the feature more clear. There is more information in this data then the plain time series plot provided. We see that the first three lags clearly exceed the blue line suggesting there is possible some signal in this time series component that can be used in a forecasting approach. 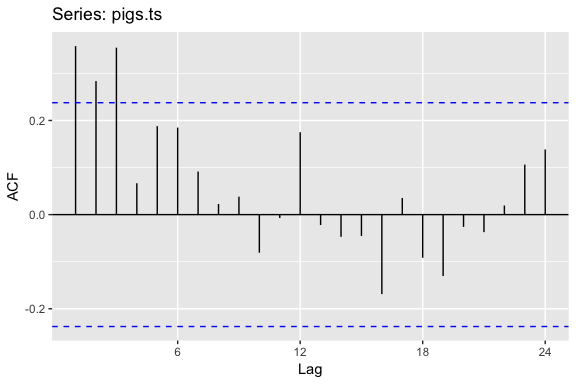 The ACF plots test if an individual lag autocorrelation is different than zero. An alternative approach is to use the Ljung-Box test, which tests whether any of a group of autocorrelations of a time series are different from zero. In essence it tests the “overall randomness” based on a number of lags. If the result is a small p-value than it indicates the data are probably not white noise.

Here, we perform a Ljung-Box test on the first 24 lag autocorrelations. The resulting p-value is significant at so this supports our ACF plot consideration above where we stated it’s likely this is not purely white noise and that some time series information exists in this data.

There is a well-known result in economics called the “Efficient Market Hypothesis” that states that asset prices reflect all available information. A consequence of this is that the daily changes in stock prices should behave like white noise (ignoring dividends, interest rates and transaction costs). The consequence for forecasters is that the best forecast of the future price is the current price.

We can test this hypothesis by looking at the fpp2::goog series, which contains the closing stock price for Google over 1000 trading days ending on February 13, 2017. This data has been loaded into your workspace.